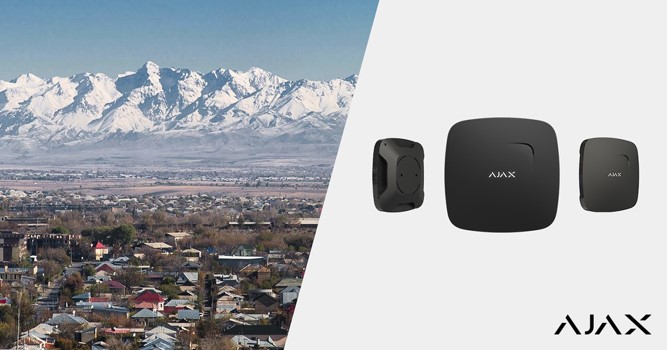 In Kazakhstan, in the city of Shymkent, the municipal authorities launched a pilot project to install carbon monoxide detectors in private houses. The goal of the project is to help the socially disadvantaged as they are the ones most often affected by CO incidents.

Ajax wireless fire detectors were chosen for the project. This month they saved the lives of three people, and, as a result, Ajax security system is planned to be mass-installed in thousands of homes.

In the beginning of the year, the city digitalization department of Shymkent in a pilot project, together with the Ministry of Emergency Situations and the company “ProLife”, installed Ajax security systems in ten private houses for free. Each kit included an intelligent Hub central unit and a FireProtect Plus fire detector.

The alarm system worked as follows: as soon as a dangerous concentration of CO accumulated in the air, the Ajax system immediately alerted the residents and sent an alarm to the security company.

In the course of the project, several lives have already been saved. In early March, late in the evening, the “ProLife” security company received an alarm from a FireProtect Plus detector installed in one of the homes. As a result they found that the carbon monoxide content in the house was 0.3% higher than normal; the cause was a gas leak in the tap of a stone oven. There were a mother and two children in the house, and this concentration of gas could have been fatal for them.

Carbon monoxide is deadly for humans. At the same time, it is completely invisible; carbon monoxide has no color or smell, so it can’t be sensed. Only specialized detectors can detect dangerous concentrations of CO in the air and they would cost a fortune to install. First of all, the cable laying costs are prohibitive.

The Ajax security system is just as reliable as wired solutions, but its installation requires much fewer resources. Considering that not all residents of the houses could agree to the installation of cables, installing Ajax was the ideal solution for the municipality.

At this point, the project involves installation of another 1,000 hubs and 1,000 detectors that register smoke, temperature spikes, and dangerous CO levels. First, the detectors will be installed in low-income households. In the future, according to the Department of Emergency Situations, a similar alert system is planned to be installed in 30,000 residential buildings in Shymkent.