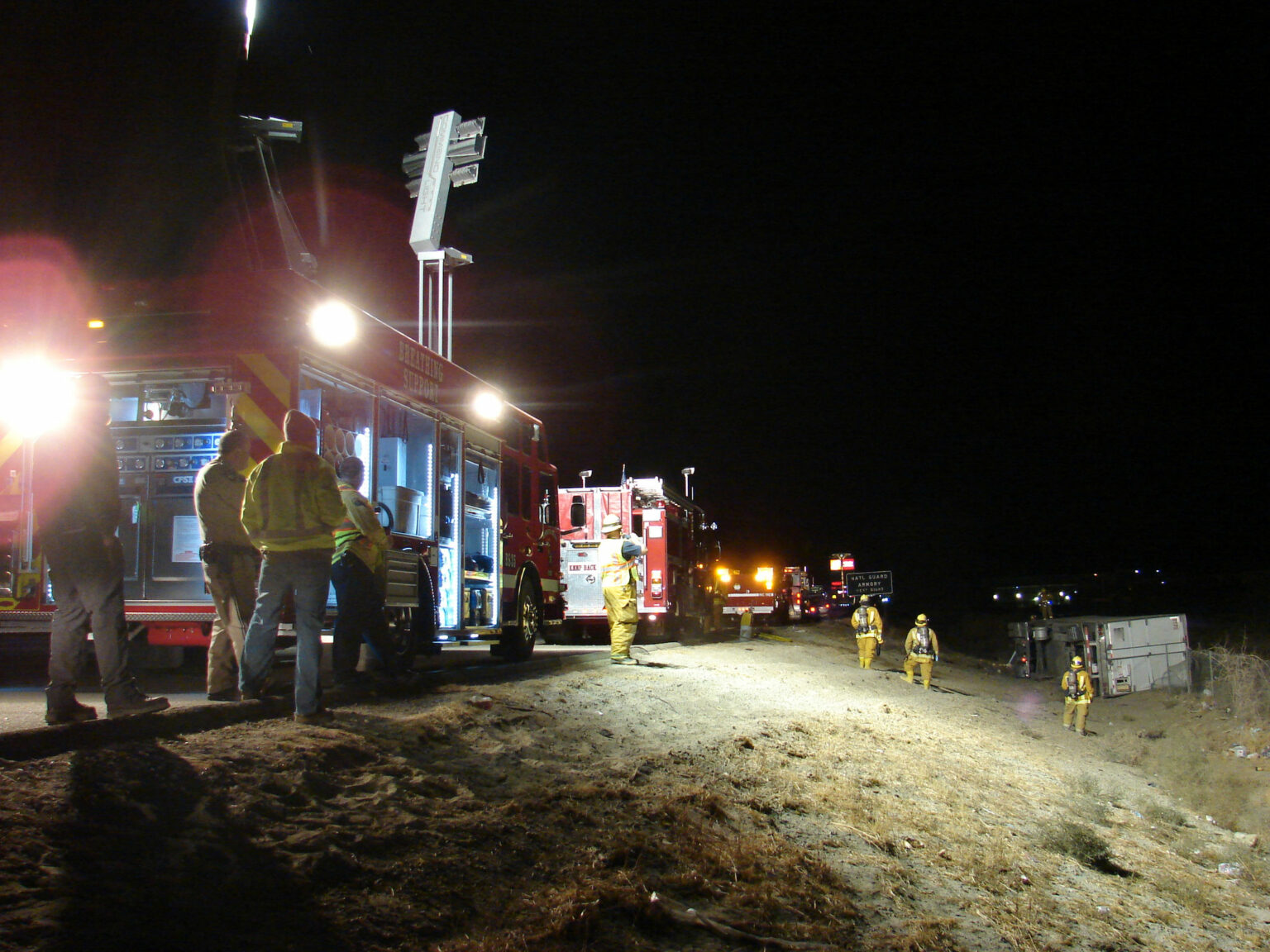 As lighting solutions are becoming a priority, departments are now finding that brighter doesn’t mean better

Heading up Loveland Fire Rescue Authority and an ancillary fire station in the Big Thompson Canyon, Erv Weinmeister and his crew were no strangers to responding to one of Colorado’s most dangerous canyons with it stretches of plummeting ravines and craggy mountainsides. Fifty years later, Weinmeister still recalls how perilous those canyons were at night.

It was that lack of lighting that led to Weinmeister’s founding of Command Light. Tinkering to get more light on his rig, he began mounting light poles to elevate light. But that wasn’t good enough. Weinmeister wanted to angle and rotate the fixtures, so by the 1970s, he invented the industry’s first hydraulically operated light tower, followed by Command Light’s patented electric tower in the 1990s. Needless to say, over the decades, the family-owned company has witnessed many lighting evolutions, including the advent of LEDs (light-emitting diodes).

But with all these innovations, Roger Weinmeister, Erv’s son and Command Light President, will be the first to admit too many departments are still operating in the dark.

In fact, he says the evolution of brighter LEDs has become a blinding detriment to departments. Swept up by the influence of lighting manufacturers constantly vying to outshine each other with more lumens, the fire industry has fallen back to the long-ago days of inadequate scene lighting, losing sight of the most basic lighting principles. The result? In some instances, personnel are being inundated with TOO MUCH LIGHT, and in turn, NOT ENOUGH LIGHT where it matters most.

So, let’s start with this notion of TOO MUCH LIGHT

Back when LEDs were first introduced, we saw fixtures in the 10,000-lumen range. Then, 15,000. 20,000. And now, some lighting manufacturers tout 30,000 lumens. That’s great if those 30,000 lumens aren’t pointed directly in your eyes. But in some cases, that’s exactly what’s happening. Motorists are being blinded as they approach an accident. Firefighters are battling glare on the fireground. All that bright light is usually wasted, inefficiently directed upon the scene thanks to today’s trend of fixed LED lighting. We’ll talk more about fixed lighting in the NOT ENOUGH section, but first let’s delve into some forgotten principles, starting with lumens.

Think of “Lumens” as a total power rating. Measured at the fixture itself, this number does NOT reflect how much usable light is being directed at the target, making this arguably the more important factor. That measurement is called “Lux” and can be affected by many variables, like target distance, light grouping and fixture degradation. If we were flowing water, “Lumens” would be equated to GPM, while the amount of water on target is “Lux.” This is your working light, and it’s important to disperse this light evenly throughout the scene. Why? Basic lighting principles …

A firefighter’s eyes must work harder to adjust when he or she moves from dark to almost-blinding areas of the scene. We could get into the science behind the breakdown of rhodopsin, a light-sensitive protein in the eye that activates the retina’s rod cells, but we don’t need to remind you how it feels like when your eyes adjust to lighting extremes. And then there’s the issue of glare created by all these super LEDs.

In fact, this blinding effect has international apparatus standard organizations discussing whether limits should be set on the brightness of LEDs or if more dimming fixtures should be mandated in the future.

One simple fix is to use smaller fixtures, spaced evenly around the truck to create uniformed lighting. The cost of this is comparable to the purchase of a high-output fixture. In short, you don’t have to have max lumens to be effective. On the downside, though, your fixtures are fixed, which brings us to …

The issue of NOT ENOUGH LIGHT

Over the last decade, departments decided to forgo light towers on their apparatus, believing that if they bought enough bright LEDs they’d get the job done, but if we go back to the basic lighting principles that Command Light stumbled upon in the 1970s, gathering, directing and elevating light with a tower is essential to turning bright light into usable light.

Let’s start with the principle of gathering light. Think of stadium lighting at your favorite sports arena. Arena lights are clustered to gather and create uniform lighting. A light tower acts in the same manner, but with an extra advantage over arena lights and truck-mounted fixtures — tower lighting is not fixed. Instead, that beautiful, uniform swath of light can be directed virtually anywhere thanks to a tower’s ability to angle and rotate. Some towers feature optional backlighting, which allows dual scenes to be eliminated, creating even more usable light.

And remember that glare we were just talking about earlier? Well, elevated lighting helps to position the fixtures well overhead, allowing human anatomy — and more specifically, the supraorbital bone above your eyebrows — to shield your eyes from glare. In addition, some light tower manufacturers, like Command Light, feature designs that allow the tower to overhang the side of a vehicle in a streetlight position to illuminate work areas and prevent shadows — all without the blinding glow of today’s super bright LEDs. And when we say “super bright LEDs,” we shouldn’t forget to add “expensive, super bright LEDs.”

During the last decade, the cost of LEDs has continued to grow as lumens climbed, which resulted in departments cutting the tower to salvage budget. But now, the industry is seeing a different trend — the importance of usable light over bright light, which has led to the push for economical, yet effective LEDs placed on light towers. In 2020, the FireTech team at HiViz LED Lighting introduced the Helios LED fixture to the market. These lights shave the cost of a new light tower by 33% while delivering 14,000 lumens per fixture, bringing us back to the earlier lumen days but with a renewed focus on light placement, and more importantly …

The perfect amount of light

So as your department considers its scene lighting needs, don’t forget to think about your environment. What is the usual topography that your crews face? Rocky terrain? Neck-breaking slopes? Plummeting Big Thompson River ravines? Lighting that can be angled certainly has its advantages in these environments.

For the Township of Langley in British Columbia, Canada, the department faces a variety of challenges that require versatile lighting — so versatile in fact, Langley spec’ed two light towers on its 2019-built heavy rescue. “We’re located near the Trans-Canada Highway,” Deputy Fire Chief Monty Armstrong explains, “and we have several vehicles involved in accidents at one time, but we can’t have multiple trucks located in two to three places to provide lighting. That’s where these towers allow us to position the light where we need it, and when it gets cold up here, we can even hang our quartz-halogen towers over the truck to create a warming area for rehab.”

In short, your scene poses a myriad of challenges, and in the end, it’s not always about how much light you shine on the obstacle. Sometimes, it’s just a matter of directing your LEDs there. That, alone, can be the perfect amount of light — enough to save and protect life.