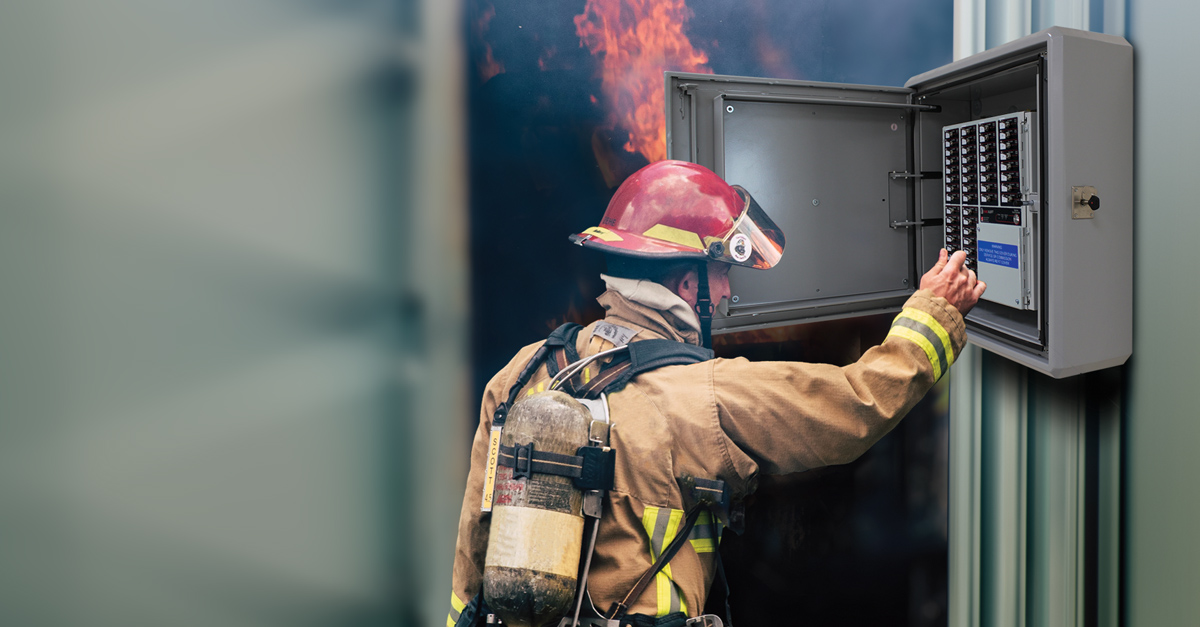 In June 2017, a fire broke out in a fourth floor flat in the 24 storey Grenfell Tower block of flats that spread quickly and claimed the lives of 72 people, injuring 70 others. Following this, the Scottish government formed an expert review panel to consider whether the Scottish Building Regulations or the Technical Handbooks supporting the building regulations required change.

The expert review panel recommended that for all new blocks of flats of more than 18 metres above ground, facilities should be provided for the use of the fire and rescue service to initiate an evacuate alert signal within flats. It was considered necessary that a standard be produced to allow the technical handbooks to refer to a specific document and this led to the publication of BS 8629 in 2019.

Andy Scott, Projects Director at C-TEC, a leading UK manufacturer of life-safety systems, discusses the recent changes to legislation and what it means for fire safety professionals.

In November 2019, BS 8629, a new British Standard, was published for evacuation alert systems in the UK. Can you explain how it came about?

After the Grenfell Tower fire, the Scottish government quickly brought in a law requiring manual evacuation systems to be installed in new residential buildings taller than 18 metres. This meant a standard was needed to ensure these systems would be effective, so BS 8629 was written quickly so it would be available when the law came into effect.

Following this, the Grenfell Tower Inquiry phase 1 report was published, and it recommended that evacuation systems should be installed in all new and existing high-rise residential buildings, which has led to much more interest than was originally expected.

What is an evacuation alert system?

Currently, the only way the fire service can evacuate a building that does not have a communal fire alarm is to knock on the door of each flat, which puts firefighters at risk and, in a serious fire, may not even be possible, leaving residents unsure of whether it is safer to stay put or leave.

The fire and rescue service will only use the evacuation alert system if they do not have enough resources to fight a fire effectively or if a fire is getting out of control, so it is a last resort that may be used hours after a fire first starts. This is in contrast to a normal fire alarm system, which incorporates automatic fire detectors and operates shortly after a fire starts.

Are fire alarms currently installed in purpose-built blocks of flats?

Many people think that fire alarms are installed because they can see smoke detectors in corridors. However, these are not normally linked to a fire alarm; rather they control ventilation systems that are used to clear smoke from corridors.

When modern high-rise blocks were first built, the BSI’s CP3 guidance said that, provided fire-resistant construction was used, people would be safe in their flats, but they should be able to leave safely if they wished. Later, automatic fire detection and fire alarms were installed in common areas of some blocks of flats, but problems occurred such as false alarms and vandalism.

After this, domestic smoke alarms were introduced, which warn occupants and give them the opportunity to leave their flat and call the fire service, which will normally extinguish the fire before it breaches compartmentation, although these alarms do not help people who are unable to call for help or self-evacuate.

Domestic fire alarms definitely save lives, but they do not warn anyone outside a flat that is on fire, or which flat it is, which they could if they were connected to a communal fire alarm. However, there are still concerns that false alarms from automatic fire alarms will cause unnecessary evacuations, which may be more dangerous than staying put, hence the introduction of the evacuation alert system.

What are the main benefits of having an evacuation alert system installed for landlords and their tenants?

It gives peace of mind that there is a Plan B if everything else goes wrong, not just for occupants, but also for the fire service. We have all heard about the problems with cladding, but other problems are being identified, mainly to do with poor fire compartmentation, and it may not be possible to fix all of them so there will be a continuing risk, which an evacuation alert system can help mitigate.

How will this system tie in with other active fire precautions? For example, can it be integrated with domestic fire alarms or with communal fire alarms?

From C-TEC’s perspective, the type of integration that would improve safety is important. For instance, certain types of domestic fire alarms could be connected to the evacuation alert system and their status could be monitored offsite and analysed, so that any potential risks can be identified.

Also, heat detectors in flats, which only trigger in a real fire, could be connected to the system, which could then signal to an alarm receiving centre, resulting in the fire service being called out sooner.

Andy Scott is Projects Director at C-TEC and sits on several BSI, CEN and ETSI committees and is currently working on projects to improve safety in high-rise residential buildings.

This article was originally published in the June edition of IFSJ. To read your FREE digital copy, click here