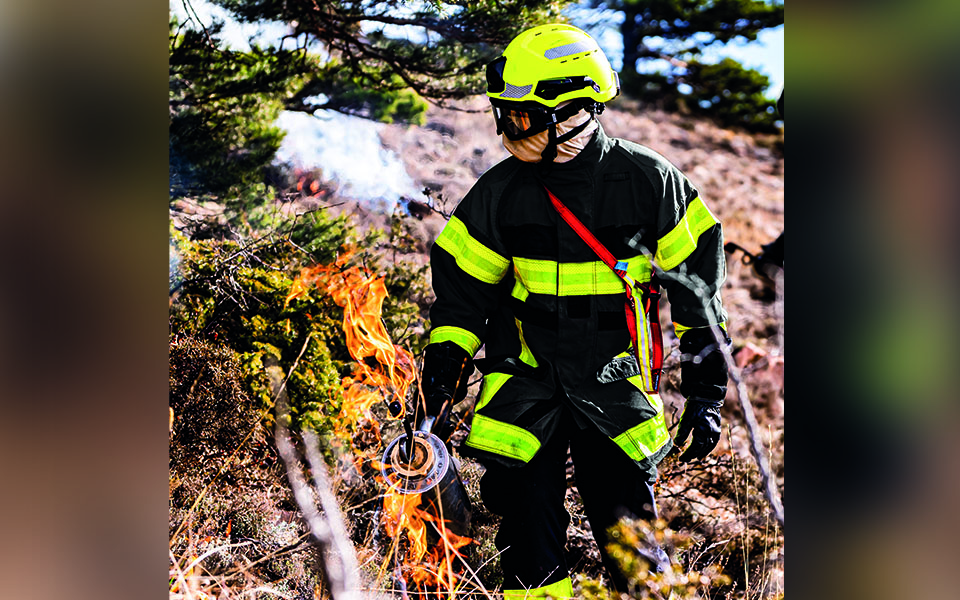 Climate change is one of the defining issues of our time. There has been a dramatic increase in climate-related disasters over the past two decades with more extreme weather events like wildfires and floods occurring over large areas affected by higher wind speeds and storms.

However, climate change influences not only the environment but also socio-economical aspects of our lives, as well as many industries including fire and rescue services by implicating changes in their working conditions from strategy and budgeting through to how they equip the frontline workers to face up extreme weather challenges now and in the future.

Fire and rescue services are commonly known as organisations that respond to all hazardous incidents. Due to the effects of climate change, fires are bigger than they used to be and fire seasons seem to no longer exist. Warm weather is coming sooner and lasting longer. Hence, wildland fires occur more frequently, are complicated to battle, are hotter, last longer, and can be devastating to the health of firefighters.

In the face of climate change, however, increased wildland fires are far from the only consequence affecting the fire and rescue services. The risk of floods are increasing, and owing to the melting of glaciers the water levels of the oceans, seas, rivers is rising. Some regions, especially along the coast, are most vulnerable to flooding. In the UK more than 5 million people live and work in flood risk areas. 2.4 million properties are at risk from rivers or the sea, while 2.8 million are currently at risk from flooding from surface water.

Changes in the climate are also causing stress on the earth’s crust, resulting in increased risk for natural disasters such as rock avalanches and powerful earthquakes. In such events, it is the role of urban search and rescue teams to step in and save lives, often travelling great distances to provide urgent relief in dangerous conditions, which also require protection, specialist training and gear to navigate.

The strength of cyclones, that are another cause of disasters that firefighters battle with, is correlated with global warming. The significant increase in the number of storms and cyclones observed in recent years can be evidenced by the six major weather events of a category 3 or higher which took place in the North Atlantic in 2017. Rescuers called more frequently to such incidents face exceptionally dangerous conditions, yet may not be properly equipped to do so safely.

Climate change has already led many industries to search for innovative and more environmentally friendly alternatives to traditional technologies, such as electric vehicles. However, electric vehicles pose a unique challenge for first responders and require adapting their protection to new conditions and threats. The way the vehicles are powered triggers longer-burning fires when they crash and get into serious accidents. They contain high voltage cables that are extremely dangerous during road rescue operations, particularly in the poorly lit conditions of roads at night, which is when the majority of fatal accidents take place.

Working on the frontline to save lives under various conditions caused by climate change or new technology means putting yourself at physical risk of serious or fatal injury. First Responders deserve the best protection and need to select a rescue helmet that is equipped with innovative features providing substantial protection and comfort while wearing the helmet in different applications.

These features can include integrated lighting systems, providing spot and proximity lighting and a tail light to help quickly identify teams on an incident scene, face protection in order to be guarded against arc flash injuries, and hearing protection with integrated communications to keep up the communication within the rescue team. Helmets also need to be compatible with respiratory devices and goggles for protection in unpredictable environments. In addition, the rescuers need to receive new training on how to handle unfamiliar risks, such as those posed by electric vehicles, and a greater overall awareness of both the climate situation and its health implications for firefighters. Nevertheless, perhaps the most urgent manner in which climate change is affecting the fire and rescue services, and the industry in turn, is the need for a helmet that can be used in a wide range of applications.

Certification for Versatile Use

MSA has taken on the mission to create a single rescue helmet fully prepared for a future affected by climate change that is designed and tested to meet the latest standards for Helmets for Wildland Firefighting (EN16471), Helmets for Technical Rescue (EN16473), Helmets for Mountaineers (EN12492), and Helmets for Water Rescue – compliant on both non-motorised and motorised rescue crafts (EN1385 +PAS028).

This demonstrates that it is possible to engineer integrated, adaptable and versatile equipment that is suitable to respond to a variety of applications and increasing needs of fire and rescue services to better adapt to the new risks driven by climate change.