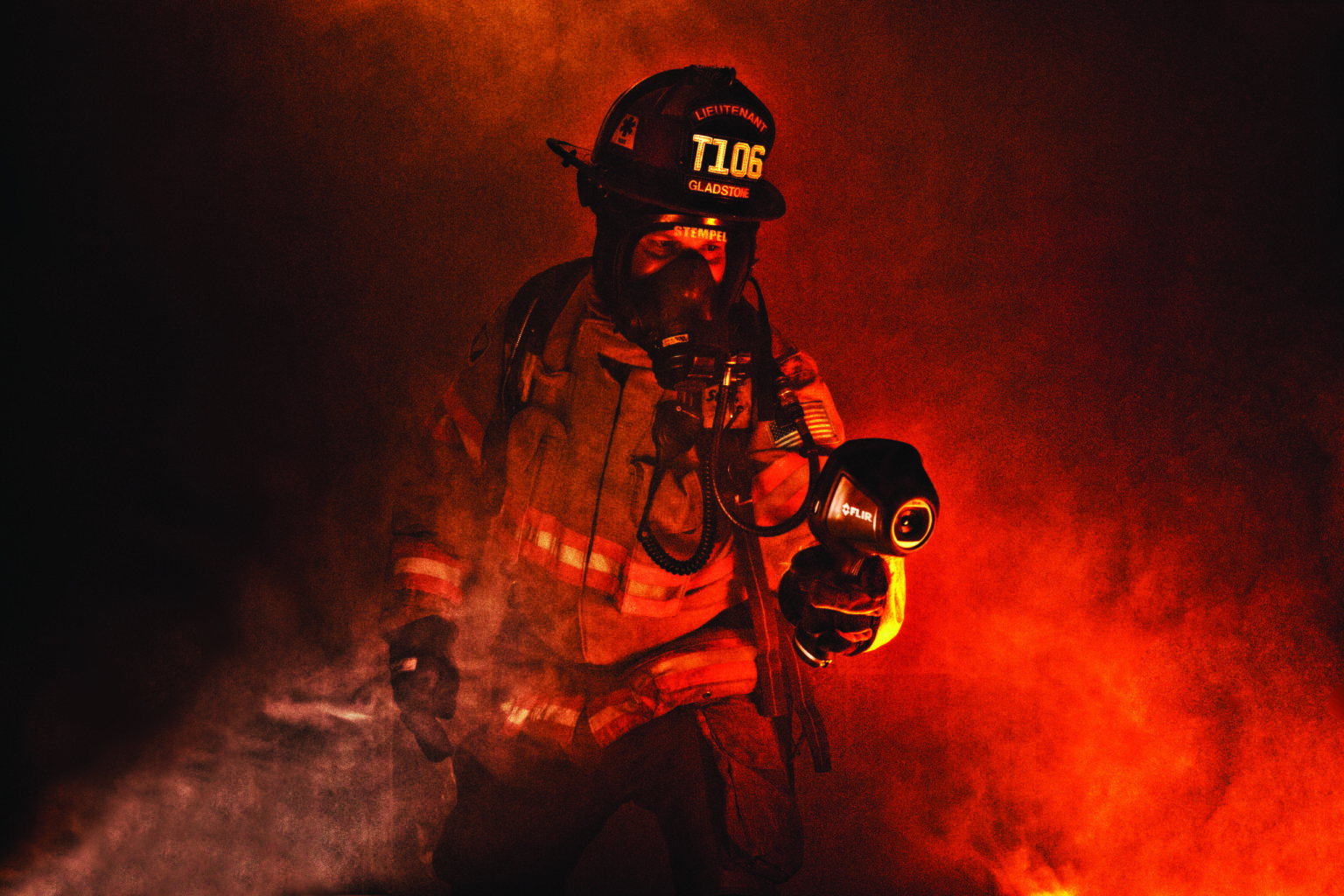 IFSJ spoke to Stephen Grondman, Key Account Manager Public Safety EMEAI at Teledyne FLIR, and Halim Uzun, Regional Sales Manager Portable Gas Detection for Western Europe at Teledyne Gas and Flame Detection, to find out more about the acquisition, what each brand was presenting at the trade show and plans for the future.

Fire fighters are regularly faced with extreme temperatures and poor visibility on the job and they need special equipment to aid them through hazardous environments. Thermal imaging cameras can help emergency responders navigate these environments and maintain a better level of safety by giving them the best solution to carry out their job. Thermal cameras see through smoke, offering invaluable situational awareness while evacuating or searching for victims.

The company has a diversified portfolio serving a number of applications in government and defence, industrial and commercial markets. Its products help first responders and military personnel protect and save lives, promote efficiency within the trades, and innovate consumer-facing technologies, strengthen public safety and well-being and increase energy and time efficiency.

For Teledyne FLIR, INTERSCHUTZ was not so much a launchpad for new product as it was a showcase of the key products it has to offer to the fire industry. Its range can be split into two categories: fixed thermal imaging cameras and portable thermal imaging cameras, such as the FLIR K-Series which is designed to see through smoke, measure temperatures and find hot spots.

Grondman says that FLIR’s fire tech cameras have an unrivalled image quality across their entire range: “Our main focus is thermal imaging. That is what we do. That is what we live and we breathe. A lot of the other cameras that are available on the market are from manufacturers of other products which also supply thermal imaging cameras but their focus is something else.”

Clarity of image is extremely important for people assessing fire in potentially dangerous situations. “The benefit to having a clear image, it can see through smoke – smoke has no effect on the image. A thermal image will always be there whether it’s day or night it doesn’t matter,” he explains. “It will show up because you have the temperature difference.”

The most recent product launched by Teledyne FLIR was an ATEX certified AX housing for its FLIR C5. “ATEX means that it needs to be explosion proof, so for instance take the oil and gas industry, chemical industry: ATEX is a general European certification standard,” Grondman explains.

Looking ahead, he adds: “There are ideas in development, but it is difficult to say where they will lead to. There is a shift towards every firefighter having their own thermal imaging camera, but equally there are moves towards a more sophisticated thermal imaging camera to be used by certain teams in a fire department.”

Teledyne Gas and Flame Detection’s brand is backed by more than 100 years of gas detection experience and has become a world leader in the design and manufacture of high-quality and innovative portable gas detectors, specifically designed for the oil and gas, chemical and shipping industries world-wide. Its manufacturing site in Renfrew, Scotland, has supplied over 200,000 devices across the UK and many more across the globe.

At INTERSCHUTZ, was launched its Gas Laser with highly advanced laser technology, designed to detect natural gas with the aim of enhancing safety and improving detection for fire services, and first responders.

Frequently, fire personnel and first responders are called to natural gas emergencies using equipment that puts them close to potentially dangerous structures. The Gas Laser was created to support remote detection by allowing the operator to work at a safer distance from the hazard location. When access to a property cannot be established, the Gas Laser gives the user an audible and visual indication to the presence of methane.

It performs a quick scan which enables fire personnel and first responders to make rapid decisions and establish control of the gas and ignition sources should a gas escape be detected. It is able to detect gas from a distance of 30 metres, has an eight-hour runtime, features highly visible, sunshine resistant guide laser equipped for location accuracy, graphical interface for easy user interpretation, colour camera with Bluetooth, WIFI, and datalogging onboard and is Certified Intrinsically Safe to Class I, Division 2, Group D, T4.

“When we are talking about our products, their main function is to protect the worker,” explains Uzun. “The Gas Laser is important because it enables them to stay at some distance from the area of risk. Before going in they can use the Gas Laser to check if there is methane inside, which is a flammable, explosive gas.” The Gas Laser was launched at the show and by the second day Uzun says they had already had a lot of firefighters coming and testing it and have given lots of positive feedback about it: “Already a lot of firefighters who want to see it in action – they want us to come onto the field to see how it works in more detail.”

Integral to the design of the Gas Laser, says Uzun, is how easy it is to use: “When we are promoting the Gas Laser to our customers they know that their worker will be able to use the product easily because it is not difficult to use. It only has three buttons on it: you switch it on, you start to use it, you use it where you want to check and see if it is safe or not.”

Also on show from Teledyne Gas and Flame Detection at the show was its improved GT-Fire: an innovative, hand-held solution designed for the fire industry to help isolate gas leaks quicker and easier than before. After normal evacuation procedures are complete, the GT-Fire portable gas detector enables firefighters to conduct more specific leak detection investigations while they wait for gas utility companies to arrive. With this, firefighters have additional information to secure a scene more effectively.

With increased sensitivity and flexible probe, firefighters have enhanced capabilities within a single instrument, meaning they can react faster and with more knowledge. The large backlit display provides meaningful and accurate data, giving them confidence and assurance at the scene.

Uzun adds: “In a world today where a lot of companies are trying to reduce the cost by moving away from Europe, we managed to stay in Europe which is for our customers very important. We are able to answer very quickly any requests from our customers where they are.”