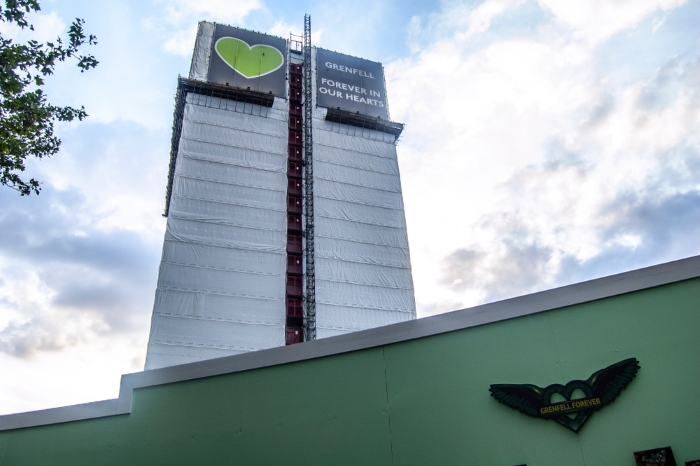 Peter Maddison, who was director of assets and regeneration at Kensington and Chelsea Tenant Management Organisation (KCTMO) continued giving evidence at the Grenfell inquiry about cladding, cost quotes and his recently submitted diaries.

The Guardian, BD Online and ITV News all reported on the final day of Mr Maddison’s evidence at the inquiry, in which he was asked about the ‘candour’ of his testimony by inquiry counsel Richard Millett in relation to why he did not mention a ‘secret’ meeting with contractor Rydon in his witness statement, with the March 2014 meeting potentially having ‘breached procurement rules’ and called to discuss ways to cut £800,000 from the cost of the project.

This included swapping zinc cladding for aluminium composite material (ACM), but Rydon ‘had not yet been appointed’, with concerns that rival bidders who were not allowed to negotiate further budget changes ‘could complain’.

Questioned about this, Mr Maddison said ‘until recently I had forgotten about this dialogue entirely’, with Mr Millett then asking him whether he realised, ‘as an officer of a public authority having exercised a public function’, he owed a ‘duty of candour’.

Mr Maddison responded ‘absolutely, that’s why I’m here’; to which Mr Millett asked in turn whether he accepted that ‘by not coming clean about these discussions in any of your statements […] you failed in that duty’.

Mr Maddison disagreed, and said ‘I didn’t remember the detail of this particular moment’. A 2014 email from KCTMO’s lawyers was shown, which asked if KCTMO had considered whether Rydon’s £9.2m bid was ‘abnormally low’ and ‘are you satisfied Rydon’s bid is sustainable?’.

It also emerged that a meeting of KCTMO’s executive board had questioned this as well, and in response to this, Mr Maddison said that ‘the project was delivered on budget and that’s the best sign as to whether or not the price was the correct price’, as well as noting he believed the board had been asking ‘sensible questions’ – but Artelia, as cost consultants for the project, had evaluated it and ‘felt that it was sustainable’.

Mr Millett retorted that ‘the fact that the project was delivered on budget is not of great assistance to us given that we know what happened to the building’, before asking Mr Maddison if he had personally had any concerns about the low bid. Mr Maddison said he did not, and also did not consider the ‘abnormally low’ cost being cut by a further £800,000 ‘unsustainable’ either.

He stated: ‘We didn’t get a large number of bidders in the end, and there was a spread between first and second and then second to third. Artelia carried out an analysis and recommended we go forward, so they didn’t flag up any specific issues. I took the advice from Artelia. I didn’t see anything that suggested to me that this was an artificially low price.’

Mr Maddison also said he did not believe that KCTMO’s lawyers at the time, Trowers and Hamlins, were warning of a problem, adding: ‘Our solicitors here are saying: “Have you thought of this?”. And the answer is: “Yes, we have thought of this. The professional team has considered this and it is felt to be a sustainable scheme”.’

On the meeting between KCTMO and Rydon, Mr Maddison said it was ‘necessary’ to secure agreement on the ‘principle’ of making savings before appointing the latter as main contractor, and that this approach was ‘driven’ by the ‘desire to avoid’ a six week delay in moving the project forward if Rydon could not be chosen as the preferred candidate by KCTMO’s executive board.

The Ojeu rules are complex, and things move within the quite extended time process of the procurement. I don’t think it’s uncommon for clients to have to weigh up these sort of risks in a process that can be challenging.’

Asked if he had questioned ‘whether there would be a difference in quality or performance’ with the switch to ACM, Mr Maddison said he didn’t ‘remember having a specific conversation on that personally.

The assumption here is that all materials proposed by the designers comply with building regs and the law’. He also said he did not ask why ACM was ‘so much cheaper’, or whether it was fire safety compliant.

Asked why he had not handed over diaries or notebooks about the project until just under a fortnight ago, Mr Maddison said that post Grenfell he was ‘not asked to retain’ all of his documents in relation to it or hand them over, stating that he told KCTMO’s solicitors Kennedys about them, and that one of the firm’s partners told him to ‘keep hold’ of them but ‘didn’t ask him to hand them over’.

Mr Maddison noted that he had used these to produce a timeline of events about the ‘lead-up’ to the fire, which was used by Kennedys to write his witness statement for him.

He was then asked why the KCTMO and Rydon meeting was not recorded in the diaries and notebooks, described by Mr Millett as a ‘yawning gap’ amid Mr Maddison’s ‘thorough and quite prolific’ notes on the project.

In response, Mr Maddison said he did not ‘agree that I’m a prolific taker of notes’, stating in turn that ‘what I do is note action points’. He also noted that he had not discussed the notebooks and diaries with KCTMO’s previous legal firm Devonshires, and had not looked at any of them since 2018.

He continued: ‘The thing that triggered me to think of them was when I saw a couple of references when watching witnesses from the TMO, there was some mention of notebooks.

‘It triggered that thought and I flagged that up to Kennedys and they immediately disclosed them. In the weeks after the fire, I went through and did a transcript of all of my notebooks to try and create a timeline of what had happened, and did the same with my emails. I sent that document across to Kennedys. It was a transcription of what was basically in my notebooks.

‘I wouldn’t call it verbatim but it was a summary of each entry. I didn’t do the diaries… it was the notebooks. I just went through and wrote down what was in there. Trying to get some order into what had happened and what the timeline was.’

Asked finally what he would have done differently in hindsight, he stated: ‘Knowing what I know now, there’s no way that we would have ever clad that building with anything that was flammable.

This was a traditional design-and-build contract that seemed very straightforward and very ordinary in many ways. That it’s ended up in this tragedy, it’s just devastating. I’m so sorry for the impact that’s had on so many people’s lives.’