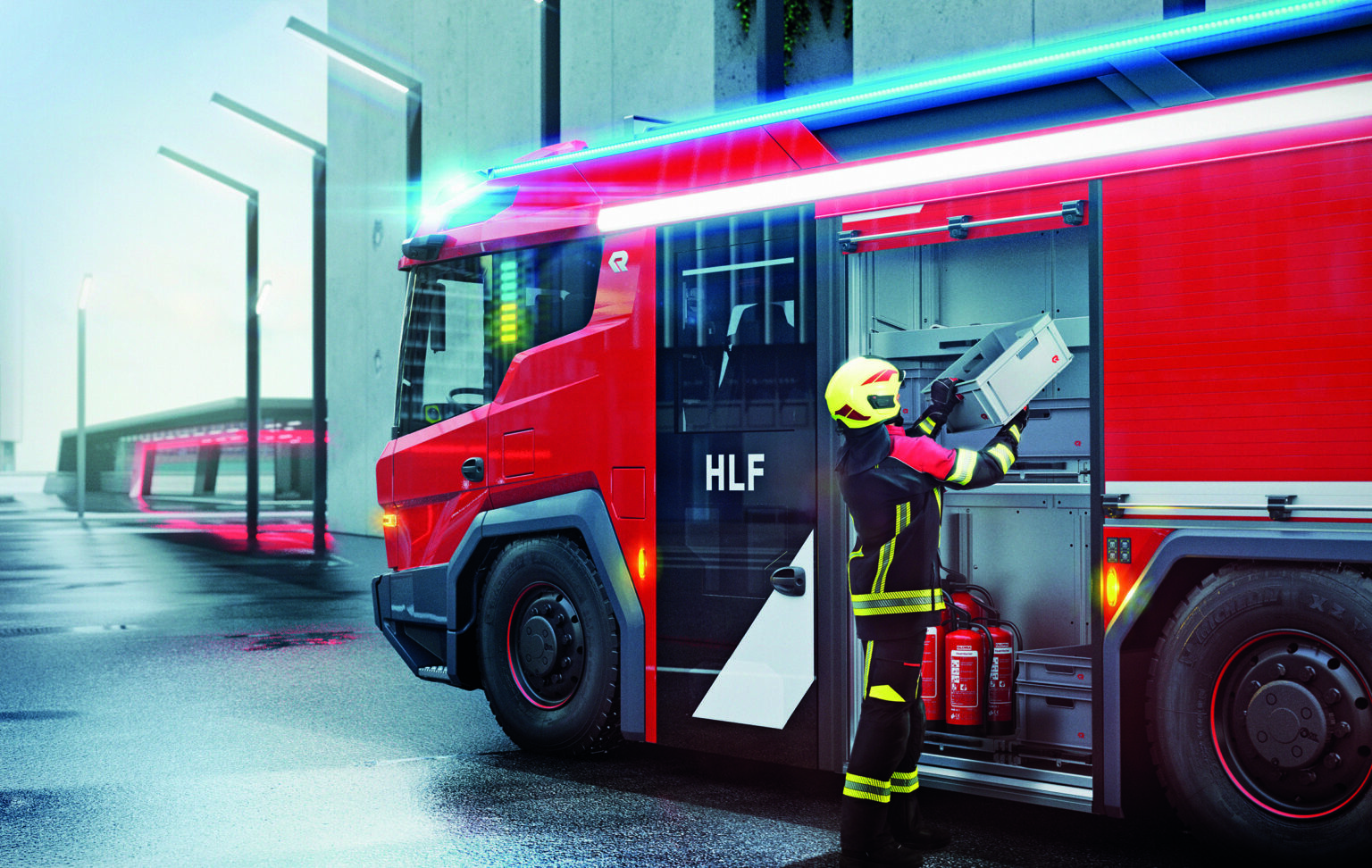 After going on display at the Emergency Service Show in September 2021 in Birmingham and being tested on the streets of Berlin, Amsterdam, Dubai, and Los Angeles, firefighting vehicle and equipment manufacturer Rosenbauer’s Revolutionary Technology (RT) is among those setting new standards in the fire service industry.

With the RT, Rosenbauer has taken aim at reinventing and redesigning the entire firefighting vehicle with a design that emphasises safety and ergonomics in all respects, boasts a chassis that gives the RT driving characteristics that are more reminiscent of a car than a truck, and provides fire departments with the necessary everyday connectivity to the digital world for the future.

One of the most striking features of the RT is its driving dynamics. Two electric motors with a total output of 2 x 180 kW (peak) or 2 x 130 kW (continuous) drive all four wheels and generate propulsion is a first for emergency vehicles weighing 16 to 18 tons. Its two-speed gearbox ensures that the full torque is available even when starting off on hills, and that there is enough traction for steep gradients.

Due to its compact dimensions (width: 2.35 m) and unique architecture, the driving behaviour of the RT is designed to be more stable than that of firefighting vehicles with a classic body module. Its low-floor chassis has a core tube frame in which one of the two high-voltage batteries is installed, which results in a much lower centre of gravity compared to firefighting vehicles built on truck chassis.

Independent wheel suspension and switchable rear-axle steering are also in place to ensure agility and manoeuvrability, which Rosenbauer says is particularly noticeable when overtaking flowing traffic, in fast bends with a tight curve radius, and when driving on narrow streets. The vehicle also features an air-sprung chassis to allow the driving level to be adjusted to the terrain and the vehicle to be lowered on scene in order to allow unhindered access to the crew cab.

As you might expect for an electric vehicle, the RT is extensively digitalised. The cockpit offers a command post where all functions from lighting to extinguishing technology can be controlled via a 17″ display centrally installed in the console. Several functions can be activated simultaneously at the push of a button, and the RT can, for example, be switched to ‘ready to start’ or ‘ready to take off’.

A self-contained secure W-LAN network can, for example, be used for wireless control of robots, drones, and other electrical equipment, ensuring networking at the site of deployment, and thanks to the Rosenbauer Connected Fleet Vehicle Management System, the vehicle position, operation and condition can be checked at any time.

The soundproofed and air condition cabin’s layout and seating arrangement are designed so that the RT can act as a localised operations centre. The cockpit and crew compartment form a single unit and are fully accessible from end to end. The driver’s and commander’s seats can be turned inward by 90° and the crew seats are situated against the sides of the vehicle and on the rear wall of the cabin, creating a meeting room layout in the cabin for briefings. All relevant data can be shown on the cockpit display, which is visible from all seats.

Ensuring firefighting teams are never left without power, the RT is equipped with one or optionally two high-voltage battery storage units, each with a capacity of 66 kWh which feed the traction drive and provide the energy to operate the pump and other consumers at the drafting point. External devices, such as fans or submersible pumps, with a total power consumption of up to 18 kW can be operated simultaneously via the power outlet.

In addition, the RT is equipped with a range extender in the form of a diesel engine with power generator with an output of 225 kW as standard installed in the body to save space. This essentially turns the vehicle into an integrated power plant that automatically recharges the high-voltage batteries when more energy is consumed than stored in them.

At 132 kWh, the battery storage of the RT is sufficient to be able to carry out over 90% of all standard operations purely electrically without the need to recharge, according to the initial experiences of the fire departments which have been testing the vehicle. Whilst using the range extender, the vehicle can see operating times higher than the specifications of EN 1846 can achieve.

According to the Berlin fire department, each electrically powered vehicle would save about 14 tons of CO2 per year compared to a diesel-powered firefighting and rescue vehicle. In addition, recuperation via the electric motors reduces brake wear and also fine dust particles. Exhaust emissions and noise levels are also reduced to a minimum because the energy for lighting and technical equipment comes from the high-voltage batteries, improving the working conditions around the vehicle and reducing the stress levels of the emergency crews.

The future of firefighting

Will fire departments operate fully electrically in the near future? Rosenbauer believes that the answer is yes. The RT has been touring Europe, the US and Canada, as well as parts of Asia over the past two years and has been met with great interest everywhere. Especially in large cities, fire departments have been seen to express a desire to use e-vehicles to help achieve their cities’ ambitious climate targets.

The RT is designed to present a more economic option for firefighting vehicles, not only because of the lower energy costs, but also because 30% fewer parts than conventional vehicles are installed meaning the maintenance effort is reduced. Rosenbauer estimates that around 3,200 e-vehicles will be in use worldwide by 2030, and 700 to 800 could be on the road in Europe by 2025.

Another important future-relevant aspect: The digital vehicle concept of the RT offers the opportunity to network fire departments with one another and with other emergency response organisations using its direct access to Smart City data from the vehicle, enabling firefighters the ability to better plan and carry out operations.

In the future, fire departments will be able to link into traffic control systems and control traffic lights online in order to ensure the fast arrival of emergency vehicles or to block entire sections of the road and will likely use car-to-car communication to warn vehicles up ahead and send traffic jam reports or alternative route suggestions to the vehicles behind. At the same time they will acquire much of the information and data relevant to the operation during the journey from smart buildings and smart traffic lights to smartphones, cameras, sensors, and measuring stations.

During an operation, fire departments will be able to directly access building control systems, guide emergency crews using indoor navigation and remotely monitor their vital signs. Moreover, they will communicate with each other via their own secure networks and use all available information not only during the current operation but also for preventive fire protection for escape route planning or for simulator use.

At Interschutz, the world’s leading trade fair which will be held from June 20 to 25 in Hannover, Germany, Rosenbauer will be among those opening up the next chapter in electric mobility for fire departments. In addition to the RT, a complete line-up of electric firefighting vehicles will be on display, from logistics vehicles to aerial ladders.

Alongside these, a newly developed extinguishing system will be exhibited, which can be used to quickly and reliably extinguish high-voltage batteries in electric cars. In addition, Rosenbauer will demonstrate its expertise in the areas of alternative fuels, autonomous energy systems and equipping fire stations for e-vehicles (charging infrastructure, photovoltaics, etc.).

Andreas Zeller, CSO of Rosenbauer International, adds: “Already in 2012, we outlined the vision of what the future of fire departments would look like in a digitalised and increasingly networked world, and we defined our investment strategy based on this. The most important conclusion for us from this was that the RT is the firefighting vehicle of the future. After all, vehicles are a part of Rosenbauer’s DNA.”