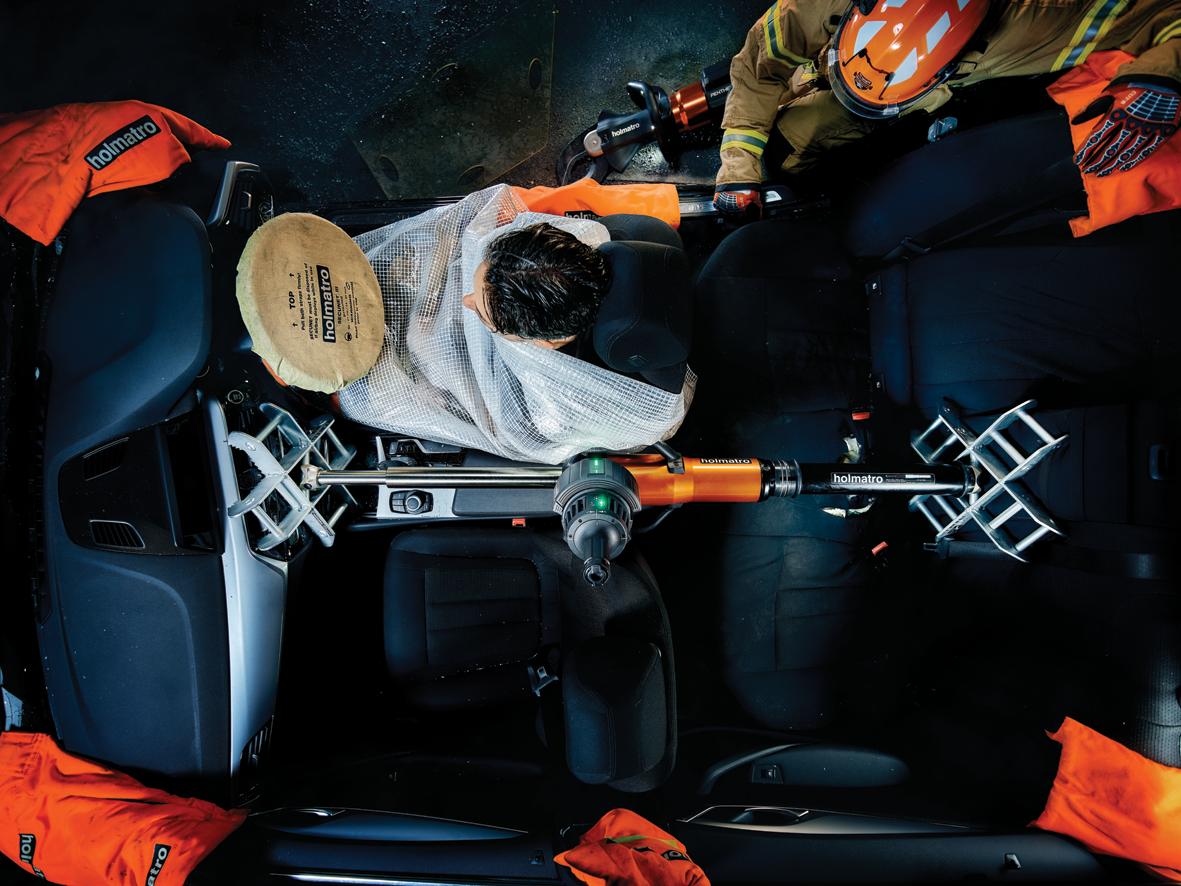 All around the world first responders work in the most extreme conditions to save people’s lives. They are faced with different challenges every day, all requiring quick decision making and solid teamwork. Working under pressure, in a race against the clock, first responders need equipment they can fully rely on.

Rescue equipment manufacturer Holmatro has been developing innovative ways to solve the biggest challenges they face, resulting in its Pentheon Series of high-tech, battery-powered rescue tools.

When saving lives, time is of the essence as even a few seconds can make the difference between life and death. Holmatro put its focus on developing fast-use products which resulted in the development of a mechatronic system inside its tools.

The result is called stepless speed maximisation. It continuously optimises the motor and pump settings, resulting in a maximised oil flow over the full pressure range and providing rescuers with rapid tool speed at any load.

In the rescue business speed is nothing without control, but when working near a patient, it is important to take precaution, and so Holmatro built in speed control to its Pentheon tool range. Its two-mode control handle offers the choice, at any time during the rescue operation, to switch between the tool’s high-speed and low-speed modes. Within these two modes, the speed is still proportional to how far you turn the handle to its left or right.

It is impossible to predict the conditions rescue equipment will be needed in, but whether it is hot or cold, in the rain or snow and even under water, tools need to work, and so the Pentheon series of tools has been designed to work under all of these conditions. Both battery and tool temperatures are continuously monitored to make sure they remain useable as overheating may cause the tool to shut off. At extremely high temperatures, Pentheon tools will automatically switch to working at a lower power consumption, without loss of force, enabling rescuers can continue working even in hot weather and at high tool loads.

The Pentheon Series tools contain a battery with increased capacity, specially developed for high-performance tools, and due to its bigger cell volume, it heats up much slower than regular batteries, allowing more work to be completed while using its maximum power.

Its patented mechatronic system controls the motor and pump settings of Pentheon tools and is extremely energy efficient, designed in a way to extend the working time. When the tool is not operated or has reached its maximum pressure, the motor stops automatically, saving valuable battery capacity, the tool can be restarted by turning the handle again.

Visibility is key in emergency situations, and so in Holmatro’s range, there are six high-output LED lights in the carrying handle, illuminating the working area at night and neutralising shadows during the day. These are powered from the main battery, which means they automatically switch on and off together with the tool and, if desired, the lights can be switched off separately by pressing a button on the tool.

Up to three chargers can be powered from a single outlet, allowing users to charge six batteries without any management. The charging cord features a magnetic connector which enables easy connection and no disconnection is required. The on-tool charging cord allows for grabbing a tool and walk away with it. Thanks to the cord’s magnetic connector the tool releases itself.

The LED indicators on the Pentheon’s battery and charger give instant feedback on the battery’s temperature, state of charge and state of health. For more detailed battery information, Holmatro offers diagnostics software which can be used. A more extensive version of this software is available for authorised Holmatro Dealer Service Technicians. This combines in-depth tool diagnostics with integrated inspection procedures, to provide the best service for Pentheon tool owners. Holmatro also has special accessories available to connect the Pentheon tools and batteries to a laptop or pc.

Tool design is crucial to make them easy to use and to handle. When working near a patient, the tool should not be too bulky, as it will be difficult to reach the right space. On top of that, if the tool is too heavy, it will be harder to operate and carry. The compact integrated motor and pump share the same shaft – this saves a lot of precious space. The battery has a semi-circle shape which makes it fit around the tool like a bracelet, which also contributes to the slim design of Holmatro Pentheon tools.

With a carrying handle that goes all around the tool, you can hold the tool in any position. It also includes a suitcase grip for easy and well-balanced carrying. The handle is made of a damage-proof high-grade synthetic polymer. This extremely tough and elastic material has the unique property of always returning to its original shape. Centrally positioned on the back of the tool, the control handle is always within reach. This allows for easy tool operation at all sides of the car and in any position. All these things make the tools way easier to handle.

The Pentheon Series consists of cutters, spreaders, rams and combi tools, with four versions of each tools.

The blades of the Pentheon cutters are mounted at a 30 degree angle, creating an ergonomic design and allowing users to operate the tool from a comfortable waist height, resulting in more space between the tool and the car, meaning easier and safer cutting.

Because modern cars are becoming increasingly difficult to cut, the Pentheon Cutters are equipped with new car technology: the U-shaped blades pull even the strongest car materials into the cutting recess, close to the central bolt, where they are cut at the highest possible force.

The Pentheon Spreaders feature pointed teeth which bite into the material at both sides. Teeth on the outside alternately point in the opposite direction to prevent the spreader from slipping away and allowing for a superior grip over the full spreading range.

The Telescopic Rams from the Pentheon Series come with a smart ram extension, meaning users will only need one compact ram for all applications, including cross ramming. The integrated laser pointer marks the exact spot the ram will touch the car construction, positioning the tool first time right.

This prevents users from needing to retract the ram, so the car construction could spring back and re-entrap their patient. The double carrying handle makes it easy to place the tool on both sides of the car, and the cross ram support set can help prevent the ram from pushing through car interior surfaces.

Next to the unique grip teeth that are also on the spreaders, the combi tools come with removable tips, making it easier to switch from spreading to cutting, without crushing the material the user cuts.

The Pentheon Series of tools will feature on Holmatro’s inside booth (Hall 26, Stand J27) at Interschutz, where visitors will be able to see them in action during the Holmatro Rescue Challenge (Stand L64, near Pavilion 35) at the show where they will prove their power on the latest models of BMW.