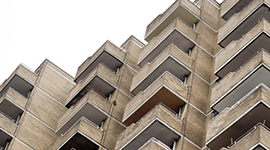 ‘AT LEAST’ 15 further forged EWS1 certificates were linked to Specialist Facade Inspections (SFI), which itself was looked into in more detail by news outlets and industry experts.

Earlier this month, it was discovered that the external wall fire review form for Marseilles House at Century Wharf in Cardiff was fake by flat owner Gareth Griffiths, who had been ‘suspicious’ as ‘when I looked at it, the writing didn’t look great for a professional RICS [Royal Institute of Chartered Surveyors] surveyor’.

When investigated, the surveyor – who did not wish to be named – confirmed she ‘had not carried out the survey or signed the form’, and when rung by Mr Griffiths ‘was horrified that the survey took place with her signature’. SFI was contracted to conduct the survey, but said it ‘only produces a report’ signed off by a third party chartered surveyor for £200, and ‘had also been the victim of fraud’.

Founder Paul Tedstone said SFI found the forged signature on ‘five or six’ other certificates, but ‘could not provide contact details for the third-party surveyor or the name of the company’. He added that the form is a ‘bloody piece of paper’, and that ‘in order to tick that box you need a [qualified person]. None of those accreditations I hold, nor did the business hold’.

He went on: ‘It was nonsense: you need someone else just to confirm what we already know. Just for the last piece of paper, as I didn’t have the letters after my name to sign it off. There has been weeks and weeks of intrusive surveys. We have done nothing wrong, apart from being a bit naïve. We’re victims too.’

SFI withdrew every certificate containing the false signature, reviewed each case and reissued each certificate, but Wales Online and LBC have reported on its conduct and the fact that ‘at least 15 more’ forged certificates have been linked to it – the new certificates however also have signatures ‘from someone apparently not currently registered to sign the forms’.

The forms, according to RICS, must be completed by a ‘fully qualified member of a relevant professional body’ such as a chartered surveyor or fire engineer, and the new signatures are from a new inspector SFI claims has ‘huge experience’ and is a member of the Chartered Institute of Building (CIOB).

Wales Online reported however that according to the CIOB, this person is ‘neither a current member nor qualified to sign the forms’, therefore ‘invalidating’ the new certificates. David Kennedy, chief executive of property development investment company Columbia Group, told the news outlet SFI had issued his company with forged forms for 15 buildings in London, affecting 1,000 residents.

He ‘started to hear about problems when there was a person trying to get their property remortgaged’, and was asked ‘for help getting an EWS1 form at the beginning of this year’. After getting the replacement certificates, he tried to ‘verify’ the qualifications of the new inspector, and wrote to the CIOB, who said this person ‘is not a chartered member, nor ever has been’.

Mr Kennedy said that ‘what these operators are doing is they’re undermining certain parts of the building profession. There needs to be better guidance on the level of qualification that is acceptable. There should be greater transparency. You have to put some leg work in to get some information’. In response, Mr Tedstone said the person was registered with the CIOB, but the COVID-19 pandemic has ‘caused an administrative error’.

He went on: ‘He is registered with the CIOB. I don’t know anybody better. He’s a very good guy. He rang me and said he’s waiting for a confirmation letter from the CIOB. Huge experience, no question. All I know is he told me it’s not an issue. I had his certificate, and from personal experience I know he’s more than well versed in rain screen cladding.’

SFI, Mr Kennedy pointed out, also has a ‘potential’ conflict of interest because it offers to survey buildings before carrying out any necessary fire safety remediation, which Mr Tedstone denied, stating: ‘We’re a local Welsh company trying to do a good job at half the price. We won the project because we were the most competitive, and by a fair margin.

‘There’s no conflict of interest because we’re totally up front. We want to be part of the solution. Our strategy is to go in, we can do the intrusive survey, we could write the specifications, tender the works, and give us the option of being one of the people to tender the works, because we would have an advantage of knowing the job. Our business model is potentially full circle.’

He said SFI was now ‘taking on three fellows from RICS’, and ‘anybody who has any worry with any certificate that we’ve supplied, I’ll happily pass straight to them, and they can further endorse it. It should be fine. I’m really sorry for any of the hassle or stress that has been brought on any resident. It’s certainly not fraudulent or a financial scam, far from it. It’s naivety on my part, that I really, really want to put right. We are passionate about the problem. We are very passionate about doing the right thing’.

LBC gave further details on its own investigation, noting SFI was set up at the end of last year by Mr Tedstone’s son Joshua, and has inspected over 200 buildings, as well as ‘appear[ing] to be charging anything from £1,200 to £110,000’ for works. LBC spoke to the female surveyor whose signature was forged, who ‘insists she had never heard of SFI before seeing these forms’, with the signatures used – in two versions, with ‘markedly different handwriting’ – not hers.

She also said she has ‘no real expertise’ in fire safety, and ‘wouldn’t know a piece of cladding if it hit me in the face’. Having reported the issue to the police, she is ‘concerned that two months on, no one has come to take a statement’. SFI claims it ‘never knew, or heard of’ this surveyor ‘and we continued to pay for her services until we found out that she, at a point in time, stopped without our knowledge’, but claimed at the start of certificates that ‘the inspection was conducted by and the report prepared under the direction of’ her.

LBC also noted the new signatory is a ‘non charted “applicant member”’ of the CIOB, meaning he has ‘paid to join up, but hasn’t been reviewed for a chartered status’. Another signatory is a chartered member of the Institution of Occupational Safety and Health, which is not an authorised body – and also claims to be an associate member of the Institute of Fire Engineers.

A London resident living in an SFI surveyed building said that this latter individual signed their second certificate, stating that ‘it takes me what 20 minutes to look him up on the internet and the letters after his name, and see that none of the letters qualify him to do this. It’s bleedingly obvious. Form number two – also fake’.

Residents in a Surrey building hired a solicitor who wrote to SFI about his credentials, stating that these do ‘not qualify him to provide’ an EWS1 ‘regardless of him not having inspected the property. In short, it is clear that the purported inspections never took place, the EWS1 certificates provided are either fraudulent or not signed by a suitably qualified person (or both) and the “report” provided is a work of fiction’.

SFI responded to this by saying it was a ‘casualty of a third party breakdown in communication’ and repaid all £14,040 costs for the job back ‘as a gesture of good will’. LBC provided some SFI surveys and certificates to independent chartered fire engineer and IFE fellow Jason Hill, who ‘presented a number of concerns’ from missing information to materials assessments, as well as how ‘two buildings appear to have been assessed comprehensively on the same day some 40 miles apart’.

He stated: ‘It takes time to assess a building, especially where there are several wall systems employed, this can take between a number of weeks and several months depending on the complexity of the property being investigated and the data made available from architect design to as built information and from the fire strategy to the fire risk assessment for the building.’

Asked whether he was ‘confident that they came to the right conclusions’, he said: ‘I’d say check again. The most important aspect of conducting an investigation using scientific principles in the methodology or any other method is to avoid forming an opinion at an early stage. Doing so is likely to create a bias which may prejudice the outcome, known as expectation bias.

‘The work produced is to carefully review all available evidence and data provided by the stakeholders to determine whether the building(s) investigated are a true representation of the build quality throughout the development’. The news outlet also found evidence of two buildings ‘failed’ by SFI but later passed after a new survey by a ‘second, different, suitably qualified surveyor’.

RISC was passed the findings, and said it was ‘currently reviewing concerns raised and any outcome of our investigation will be published on our website’. Further concerns on the conflict of interest included that Paul Tedstone owns cladding company Uniclad Ltd, with a resident of a block in Manchester who discovered the forged signature initially discovered in Cardiff on their form stating he had told her the building had failed, but ‘he could do the work to fix it’.

She said Mr Tedstone ‘said that he could do the survey but that he could also do any remedial work that was required, that raised some alarms in our heads because we thought is there not a conflict of interest here?’. In response, SFI rejected ‘any suggestion’ that it uses ‘inexperienced’ operatives to undertake ‘any aspect of its role’, and ‘all third parties that signed the EWS1 forms were suitably qualified to the best of SFIL’s knowledge and belief at all material times’.

It also claimed it does not produce or sign forms, but provides ‘diagnostic information to suitably qualified third parties that do prepare and sign [the] forms. We are not aware of any buildings that failed which subsequently received a pass’. Finally, it stated that it ‘has not forged’ the surveyor’s signature ‘and there can be no evidence that SFIL did so’.