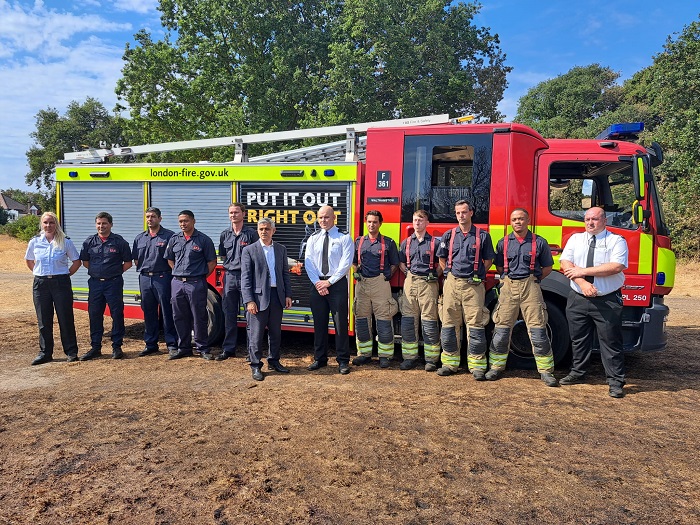 The Mayor of London Sadiq Khan has joined the call led by London Fire Brigade urging public caution during the ongoing heatwave.

The Mayor visited Leytonstone near Hollow Ponds which last week saw two large grass fire scene to look at the damage caused and to thank firefighters for their efforts in protecting the capital in such arduous conditions.

During the visit the Mayor expressed his gratitude to firefighters for their hard work, after working in extreme temperatures for several weeks now.

The Mayor of London, Sadiq Khan, said: “We are currently experiencing the driest year since 1976 and the unprecedented high temperatures mean that the grass in London is tinderbox dry. The smallest of sparks can start a large and dangerous fire which could cause significant damage to our green spaces, homes and businesses and put lives at risk.

“That’s why it’s so important amid the ongoing heatwave and drought that we all play our part in preventing further fires and reducing the pressure on our emergency services.

“That means disposing of your litter – particularly glass – responsibly, putting out cigarettes properly, not using disposable barbecues and avoiding barbecues in open spaces or on balconies. We also need to stay away from the dangers of deep water in our canals, rivers and reservoirs, which can be deadly – even for strong swimmers.

“Even though we have a drought warning in place, we are expecting rain this week. The ground is rock hard and can’t absorb rain as usual. This means the rain won’t fix the drought conditions and, if the downpour is heavy, there is a risk of flash flooding across London as water pools on the surface or overwhelms the drains.

“From City Hall, we’ve written to tens of thousands of households living in basements to raise awareness of the risks of flash flooding and steps to take to be prepared. Londoners should check their local council’s website for more information on action to take in case of a flood.”