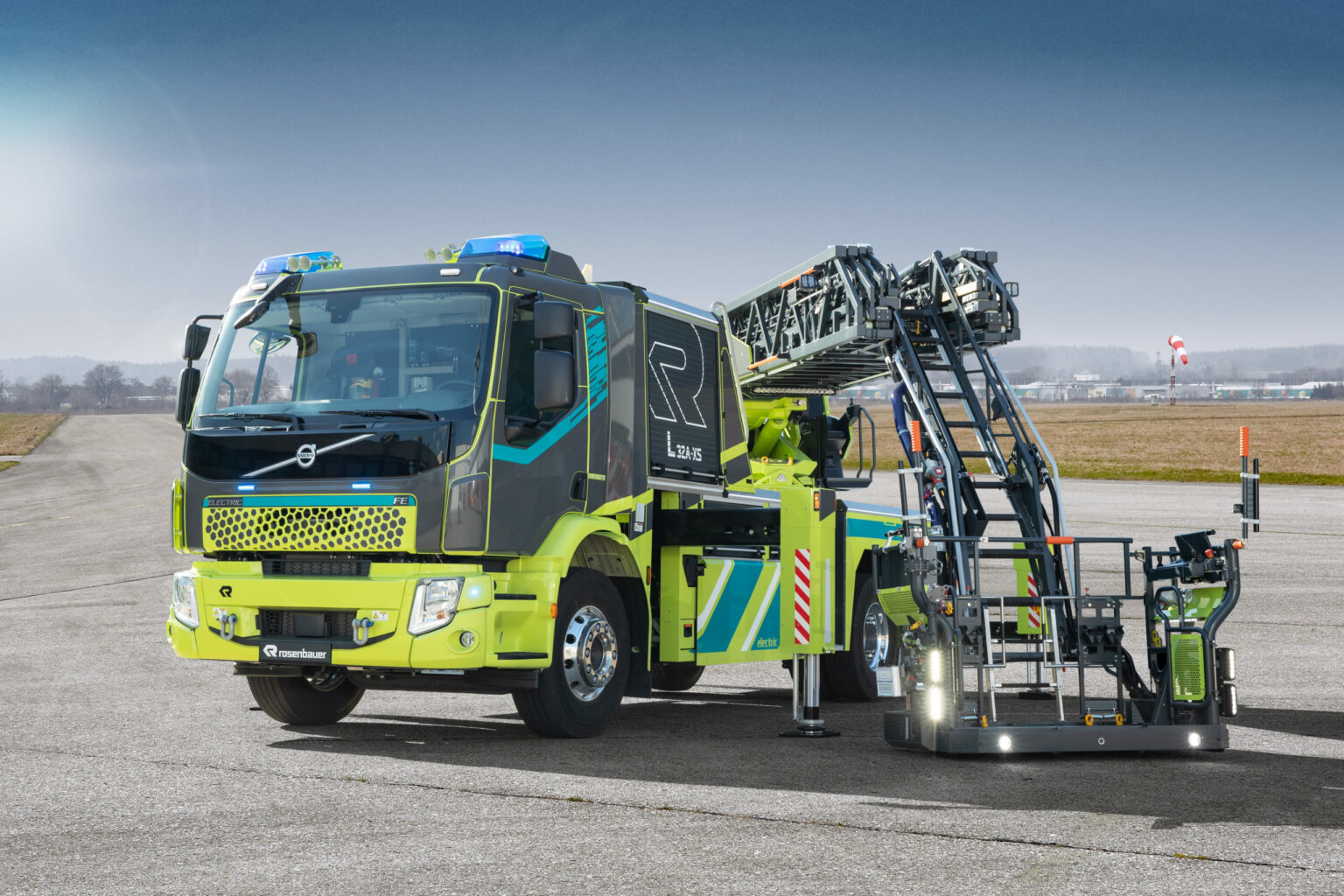 When it was introduced nine years ago, the standard aerial ladder with lowerable cage boom took aerial rescue operations to a new level – especially in confined spaces – and is now opening the way to the (electric) mobility of the future for fire departments.

The L32A-XS electric is built on a Volvo FE Electric chassis and powered by two electric motors with a combined output of 225 kW (continuous duty) via an automated 2-speed transmission on the rear axle (4×2). For ladder operation, an additional electric motor is installed as an electric power takeoff (ePTO), which provides a peak power of 100 kW and continuous power of 70 kW.

The entire system in the exhibition vehicle is supplied with energy by three lithium-ion rechargeable batteries with a usable capacity of 66 kWh each (total capacity of the battery storage approx. 200 kWh).

Rosenbauer used the exhibition vehicle to calculate two typical operational scenarios to show how often these can be repeated with fully charged battery packs before the batteries need to be recharged:

Operational scenario A comprises a travel distance of eight kilometres (outward and return), two jacking operations, two movement cycles according to DIN EN 140431) as well as one hour of light mast operation and can be repeated eight to ten times – depending on the environmental conditions such as temperature and topography.

Operational scenario B comprises a travel distance of 20 kilometres (outward and return), two jacking operations, five movement cycles according to DIN EN 14043 as well as one hour of light mast operation and can be repeated three to four times – depending on the environmental conditions such as temperature and topography.

Since the reliability of the aerial ladder is crucial in firefighting operations, Rosenbauer has provided various fallback levels of power supply. For example, the high-voltage battery can also be charged slowly during aerial ladder operation, provided the corresponding external power supply is available, if the operation lasts longer than expected and the HV battery charge is nearing the end.

Specific values from operational practice will be available when the L32A-XS electric goes into service at Schutz & Rettung Zurich after the trade fair. As a Rosenbauer innovation partner, Switzerland’s largest civilian rescue organisation will test the prototype under real operating conditions and make the findings and data obtained available for series development.