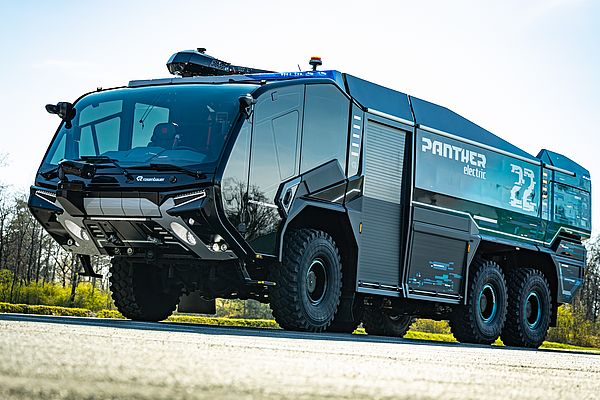 Rosenbauer is showcasing the first PANTHER 6×6 with electric driveline at Interschutz this week.

The development of the electric model follows an agreement among International Air Transport Association (IATA), the International Civil Aviation Organization (ICAO), the Airports Council International (ACI), and the U.S. Federal Aviation Administration (FAA) on the goal of net zero emissions by 2050 in global aviation.

According to the ACI, some airports 100 want to be climate-neutral as early as 2030, including, for example, Amsterdam, Delhi, London City, Marseille, Rome, Vancouver and all Norwegian and Finnish airports. The ADV airports in Germany are aiming for a joint CO2 reduction of 65%, and by 2045 they want to have achieved the goal of “climate neutrality”.

The electrification of ground support (ground vehicles), which includes the fleet of ARFF vehicles, promises to be one of the biggest levers in this regard. Rosenbauer is also convinced that this measure will play a key role in the “green recovery” of airports after the Covid 19 pandemic.

Airport operators and fire departments from all over the world were involved in the design of the PANTHER 6×6 electric right from the start.

Safety is also the top priority for the PANTHER electric, and there can be no compromises in performance either. Rosenbauer said it was clear from the very beginning that the PANTHER electric had to meet all global standards for ARFF vehicles and that no compromises would be made with regard to the performance of the overall system, even in purely electric operation.

According to Rosenbauer, the development of the PANTHER 6×6 electric was only made possible by the fact that drivelines, on-board networks and electrical components are now available that can also meet the high performance requirements of an ARFF vehicle.

Despite the increasing electrification in the commercial vehicle sector, the required electrical power demand proved to be a challenge.

Rosenbauer decided to create its own e-drive platform for the PANTHER electric in order to get the best out of the electric components.

The vehicle manufacturer’s development partner is Magna, one of the world’s largest automotive suppliers and mobility technology groups. Rosenbauer and Magna will further develop a scalable modular system for the PANTHER, which can be used to electrify not only the PANTHER 6×6 but also other variants in the future.

Compared to its predecessor, the PANTHER Electric emphasizes the sheer power and permanent operational readiness of the vehicle with a somewhat more angular and aggressive front as well as clear, simply defined lines and surfaces.

It features a new lighting concept from the airfield projector lamp and the scene lighting to the rear lighting makes the PANTHER electric more visible and safer. The paintwork of the technological leader also symbolizes the transition from the last PANTHER generation, presented at Interschutz 2015, to the new one.

At the front, the PANTHER 6×6 electric is still decorated in black, similar to the trade fair vehicle at the time. From the rear, practically from the engine compartment, comes the new energy, which is expressed with the colour turquoise.

Rosenbauer said: “The transition of the concept vehicle to series development will take place over the next two years, with sales of the PANTHER 6×6 electric starting in 2024. For the pre-series, too, Rosenbauer will cooperate with innovation partners, as it has successfully done with the RT, and will incorporate the findings from the test operations under real conditions into the development work and the set-up of series production.”