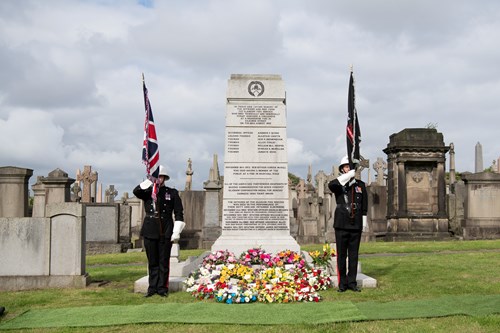 The Scottish Fire and Rescue Service (SFRS) have marked the loss of seven firefighters on the 50th anniversary of the Kilbirnie Street warehouse fire in Glasgow.

The fallen firefighters were remembered at a service held at Glasgow Cathedral and led by the Rev Mark E Johnstone, with SFRS chaplains, Rev Gordon Armstrong and Father Jim Thomson also in attendance.

Prior to the service, the SFRS formed a guard of honour and laid a wreath at the city’s Necropolis in front of relatives and friends, who also paid their respects.

Shortly after 11.20am on Friday, August 25, 1972 crews from the former Glasgow Fire Service raced to the scene of a ferocious blaze at the Sher Brothers warehouse.

As firefighters tried to exit the building, firefighter James Rook became trapped by stock that had fallen on top of him. Divisional Officer Andrew Quinn led a team of volunteers to try to find and rescue him.

As the search party entered the building the fire ignited the hardwood ceilings on the first floor, causing a massive ‘flashover’ leading to their deaths.

SFRS Interim Chief Officer Ross Haggart said: “It is an honour to be here today and to remember the seven firefighters who lost their lives at Kilbirnie Street. Our thoughts will always firmly remain with their families and friends.

“As we come together on this 50th anniversary of the tragedy, we also thank everyone for their attendance and continued support. This is a fitting tribute to seven brave men who made the ultimate sacrifice to help save lives and protect their communities.

“Their lives will never be forgotten and their spirit lives on in each and every one of our firefighters today as they approach their role with that same commitment and selfless dedication.”