Winner of the IAFC’s Ben Franklin Award for Valor announced 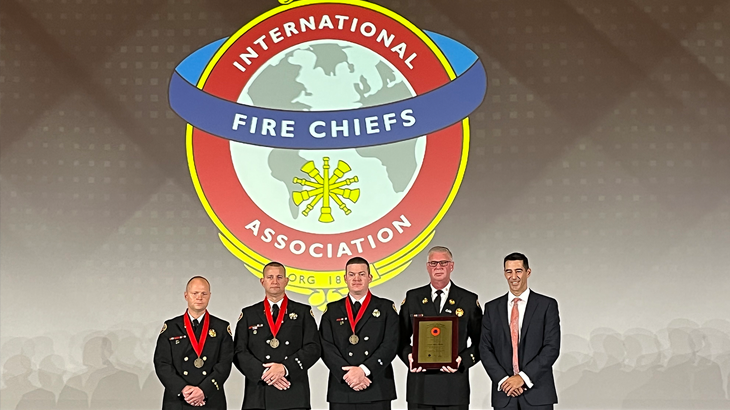 Nominated for their swift water rescue in the Whitewater River, judges said the members of the Colerain Township Department of Fire and EMS in Ohio exhibited incredible bravery, perseverance and commitment to public safety.

Chief Ken Stuebing, president and board chair, IAFC, said: “Our Ben Franklin Award for Valor, named for the nation’s first fire chief, Benjamin Franklin, is our association’s most prestigious honour. It recognizes firefighters worldwide for their expert training, leadership, heroic actions and safe practices. We thank this year’s very deserving recipients for their courage.”

Chris Lonnett, vice president, Motorola Solutions, said: “It is an honour to present this award to the heroes from Colerain Township Department of Fire and EMS. Your commitment to training and conditioning prepared you to act quickly and make steadfast decisions in the face of extreme danger and pressure. On behalf of Motorola Solutions, the IAFC and the communities you serve, thank you for your bravery. Because of you, a life was saved, and a man was able to return home to his loved ones.”

The Whitewater River is one of three major tributaries that empty into the Ohio River within the greater Cincinnati, Hamilton County, Ohio area. It is used extensively for a variety of recreational activities. On July 24, 2021, previous flooding, newly fallen trees and powerful, swirling currents made for dangerous conditions. The Hamilton County Communications Center (HCCC) received a 911 call from a kayaker informing dispatch that a companion had overturned his kayak.

The HCCC dispatched Whitewater Township Fire Department and additional water rescue elements, among them the Colerain Township Department of Fire and EMS’s Rescue 26 and Boat 26, as well as the Cincinnati Fire Department’s Rescue 14 and Boat 14. Colerain’s Boat 26 launched first, with the crew of Kaake, Prosser and Abbatiello. They found the overturned kayaker near the confluence with the Ohio River, where he was struggling to stay afloat and continuously being swept under by currents and undertow.

Prosser was able to move the boat within several yards of the kayaker. Kaake and Abbatiello swam to him and were able to secure a personal flotation device and anchor it to an overhanging tree. For several minutes they held onto the kayaker and kept him from being pinned against a growing pile of debris while they awaited additional support from Cincinnati’s Boat 14. The boat was able to get into a position that allowed rescuers to pull the victim onboard and take him safely to shore.

Medals of Honour were presented to Kaake, Prosser and Abbatiello on Aug. 25 at Fire-Rescue International in San Antonio, TX.