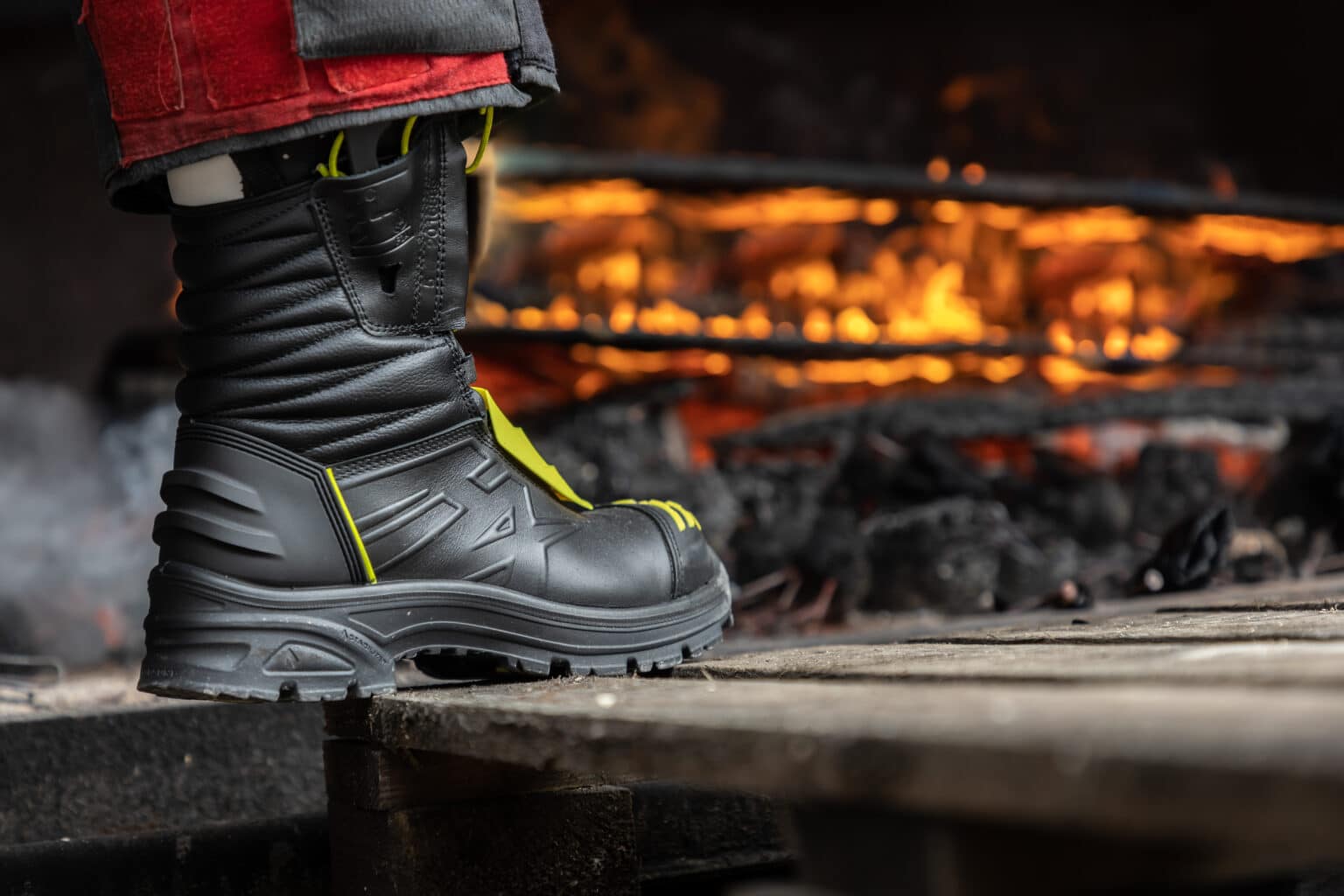 What is HAIX working on just now?

For fire specifically, we’ve recently launched the Fire Eagle 2.0. The original Fire Eagle has been our hero product for the last five to six years. During research and development, we looked at the changing role of the firefighter, considering that as fewer house fires break out, more firefighters are supporting with wildfires and road traffic accidents and need footwear that can handle the evolving demands of the job. We also wanted to respond to customers who were looking for a structural fire boot and a moorland fire boot and asked if we have anything that does both.

We launched the original Fire Eagle in 2015 at INTERSCHUTZ, the world’s leading trade fair for the fire and rescue services, civil protection, safety and security solutions. We wanted the entire typical safety features one would expect in a HAIX boot combined with less weight, more flexibility and greater comfort. The boot has seen recognition worldwide, with the Bavarian fire service among the first to test the boot and compare it to “a comfortable sports shoe”.

The most critical difference between the original boot and its successor, the Fire Eagle 2.0, is an updated design and a new, innovative quick-fit fastener system which is a world first. The RAPIDfit system gives firefighters the quickest way to pull a boot on and fits to the individual foot in just one movement, critical when a call comes in and every second counts.

We’ve also just launched a wildfire boot, the Missoula 2.0. With wildfire firefighting, firefighters are on their feet for a long time. Walking miles and miles across moorlands and challenging terrain requires footwear that feels like a hiking boot. While a lot of wildfire firefighters wear the Fire Eagle because it is comfy, our wildfire boot is best for all terrains and offers a classic lacing system.

HAIX footwear is a premium product, how do you overcome the cost barrier?

There may be cheaper boots out there, but HAIX boots will last longer HAIX footwear also offers advanced postural support, meaning less time off sick. And ultimately, a happier firefighter.

We understand that budgets are tight in all industries, and we will be as competitive as we can. But not all PPE is created equal, and we cannot fall into the false economy of buy cheap, buy twice. Firefighters deserve more than uncomfortable boots that could leak and need replacing after a year.  This is particularly an issue when departments only do a tender every five to seven years, and boots aren’t replaced unless they have become contaminated or need to be issued to new recruits.

Long-lasting quality has been the HAIX ethos since its founding in 1948 by Xaver Haimerl. Xaver’s son, Ewald, had risen to the rank of deputy chief of Mainburg fire service while working as a certified master shoemaker in his father’s factory. In 1992, when finding that he and his colleagues weren’t satisfied with the rubber boots they had to wear on duty at the time, Ewald decided to design a collection of functional leather firefighting boots for his colleagues that would set new standards of functionality, protection and comfort. The boots were so well regarded that HAIX began selling them, expanding into developing footwear for rescue workers and the police the following year.

Do you have any tips for boot maintenance?

Decontamination is key. Fires produce a cocktail of toxic, irritant and carcinogenic chemicals in the form of aerosols, dusts, fibres, smoke and fumes or gases and vapours, thereby increasing cancer risks and lung deterioration. Decontamination and cleaning procedures enroute to, during and after a fire can reduce, minimise or eliminate exposure hazards.

Wearers exposed to hazardous chemicals and pathogens need to follow the relevant cleaning and decontamination precautions in line with legal regulations to limit exposure and risk of harm to themselves and others. Anyone involved in the handling, sorting, bagging, transporting and laundering of contaminated footwear must wear utility gloves and appropriate PPE to prevent exposure.

We work with The Boot Repair Company to support our customers with proper decontamination or replace the boot in part or in whole. Regularly inspecting safety boots is particularly important for emergency service workers to avoid unnecessary injury. However, while a sole is vulnerable to wear and tear, a nicely broken-in upper can escape virtually unscathed and have tons of life left in it. We’ve found that HAIX boots can be re-soled around three times because the thick upper leather is so strong.

Our partner, The Boot Repair Company, can repair, stitch and welt each boot by hand using original HAIX components, which are 100% manufactured in Europe to meet socially responsible guidelines. A full resole offers renewed grip and posture and can double the life expectancy of HAIX footwear.

From a boot care perspective – wearers should use proper polish, wash them down, keep the leather nourished, and avoid over-drying them by exposing them to prolonged heat as the leather might crack.

Why should firefighters invest in their footwear?

Selecting safety footwear should be taken seriously, considering both the long-term benefits and potential impacts incorrect choices can have. From a financial perspective, buying quality items saves money – even if the initial expense is higher.  But you can’t put a price on health and safety. Ill-fitting or poor-quality footwear can leave firefighters vulnerable to developing or worsening musculoskeletal disorders (MSDs). Research has shown that at least 50% of workers are exposed to the risk of MSDs due to spending prolonged hours standing at work.

Firefighters can reduce the risk by choosing footwear designed with superior cushioning technology and constructed from smarter materials. Modern materials used in the interior lining of boots can help prevent blisters and soft-tissue injury by reducing friction and pressure. Discomfort, whether from ill-fitting footwear or from friction injuries such as blisters, can lead to changes in natural body posture while standing or walking.

When suffering such injuries, we may tend to ‘favour’ weight bearing on a non-injured foot (limping, for example), or standing in an unnatural position to avoid pain or discomfort. This can lead to strain or injury in turn, or if left uncorrected longer term can potentially lead to more serious musculoskeletal disorders. It is important to invest in boots with a climatic control system that regulates temperatures within the boot because damp feet are more likely to experience friction injuries. Quality is also vital to ensure longevity.

Every outside component of a HAIX firefighter boot must survive ten seconds of flame treatment without damage or burning and be able to withstand 250°C for 40 minutes without major damage to the sole. Although laboratory testing and development is a foundation of any high-quality product, HAIX’s commitment to wearer trials takes things a step further.

Testers are equipped with boots for months at a time to use during their day-to-day routine activities to ensure boots are built to last. Ultimately, investing in high-quality footwear provides a long-term investment that supports wearer health as well as safety.

This article was originally published in the November edition of IFSJ. To read your FREE digital copy, click here.