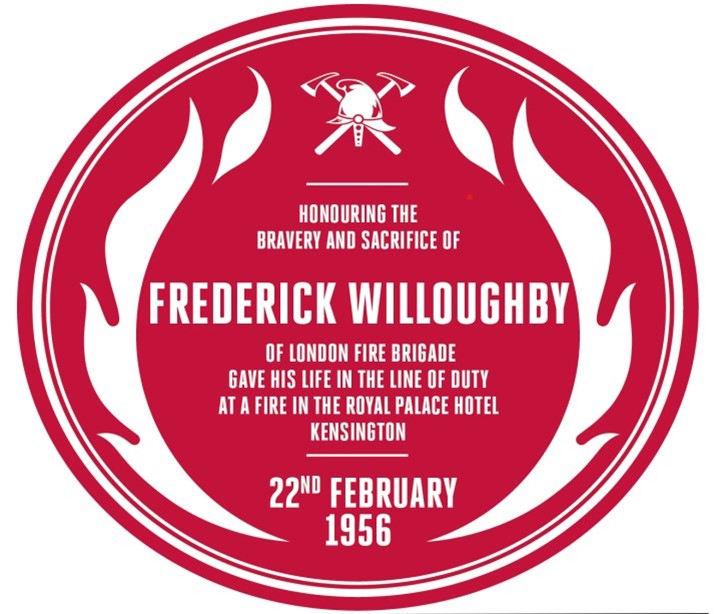 A plaque has been unveiled for a firefighter who was killed in the line of duty. Leading Firefighter Frederick Charles Willoughby, of Twickenham, was overcome by fumes whilst fighting a four-hour fire in the basement of the Royal Palace Hotel in Kensington, London, on February 22nd 1956. He died in an ambulance on the way to hospital.

Commenting, Liz Acris, Mr Willoughby’s niece, said: “I never got the chance to meet my uncle Frederick Willoughby. His death in the line of duty, protecting his community, meant I only know him through stories told to me by my Auntie Edna. But through her I understand how brave he was, and how he had a tremendous sense of duty. This plaque will help keep his memory alive for future generations to come. It is important that history is present in the spaces where it was lived, and this will help with that.”

Newspapers from the time report that Mr Willoughby is believed to have become lost and was then suffocated, even though he was wearing breathing apparatus.

Willoughby served in the Marines during World War 2, and was decorated for gallantry and devotion to duty in operations in Norway. This included volunteering to remove ammunition from a dangerous area during the last moments of an evacuation, according to the recommendation for the award.

Members of Mr Willoughby’s family flew in from Gibraltar to attend the plaque unveiling, with his niece Liz Acris speaking at it.

The plaque has been unveiled around 100 metres away from where the hotel stood, at Kensington Fire Station, and is a Red Plaque. The Red Plaque scheme aims to memorialise firefighters who have died in the line of duty and is administered by the Fire Brigades Union.

David Shek, FBU executive council member for London, said: “Every firefighter that dies in the line of duty deserves to be remembered. The London firefighting community will always make sure that people it has lost will never be forgotten. The FBU is proud to be a part of remembering Mr Willoughby and his sacrifice. The placing of this plaque will ensure that future generations of firefighters are aware of this history.”

Tam McFarlane, FBU national officer, said: “The Fire Brigades Union will always remember those who made the ultimate sacrifice. The bravery and courage of firefighters is something that should always be highlighted. Red plaques make sure that these vital parts of history are never forgotten, no matter how much time has passed. Sacrifices of yesteryear still retain a huge poignancy and importance for firefighters.”

The Red Plaque scheme is one of a number of projects funded by the FBU’s Firefighter 100 lottery.

The money raised by the lottery is supplemented by money from the FBU itself. The Firefighter 100 lottery the can be entered by anyone who wishes to help by using www.firefighters100lottery.co.uk.