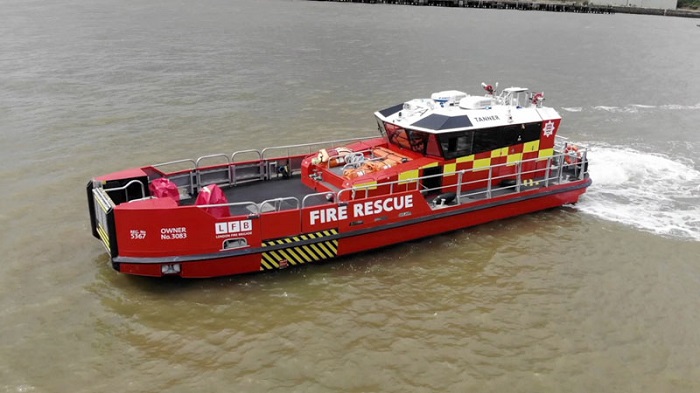 The Mayor of London Sadiq Khan has welcomed London Fire Brigade’s new fire boats to the Thames as part of a £40 million investment made by City Hall to expand the Brigade’s fleet of equipment and vehicles.

The two new boats are named after Auxiliary Fireman Harry Errington and Auxiliary Firewoman Gillian Tanner, who in the Second World War were both awarded medals for bravery.

The Mayor committed to modernising and transforming the Brigade’s rescue resources – which includes investing in Europe’s first 64m ladders, new 32m ladders and two new replacement fire boats – so that the Brigade is better prepared, organised and equipped to fight fires and save lives anywhere in London.

On Thursday, the Mayor met crews from Lambeth River Station and was shown some of the high-tech equipment on board. The new boats are twice as fast as the two previous vessels and can reach speeds of forty knots. They can carry more life-saving equipment than ever before. As well as hoses that allow crews to fight fires from the river, the boats are fitted with a hydraulic crane for carrying out rescues from the water and a high-definition thermal imaging camera.

The Mayor also visited a range of some of the Brigade’s latest equipment, including the new 64m and 32m turntable ladders, the new fire rescue unit and a Heavy Demountable Unit (HDU) unit (capable of transporting large quantities of foam to extinguish large fires).

London Fire Commissioner, Andy Roe, said: “The Brigade is transforming for London and our brand-new fire boats are the latest improvements to the new equipment we are rolling out.

“Our investment of around £40 million on our fleet over the last few years is part of our commitment to do all we can to meet the changing needs of our communities and keep Londoners safe long into the future; the fireboats will be a fantastic new addition to our fleet.”

The Mayor of London, Sadiq Khan, said: “I am delighted to see first-hand the new state-of-the-art fire boats, which are part of London Fire Brigade’s expanding fleet of specialist vehicles and high-tech equipment which will be used to help keep Londoners safe. They are part of a £40 million investment I have made as Mayor over the past three years as part of my commitment to modernise and transform the Brigade so that it is better prepared, organised and equipped to fight fires and keep all Londoners safe.

“The demands on London Fire Brigade have never been higher due to the extreme temperatures and terrible flash floods we have seen as a result of climate change. That’s why, as Mayor, I am committed to doing everything I can to ensure our frontline emergency services have the right resources, policies and equipment to serve all of London’s communities.”

Deputy Mayor for Fire and Resilience, Dr Fiona Twycross, said: “I welcome the significant upgrading of vital rescue vehicles, appliances and equipment, which will help save more lives.

“The new fire boats are a brilliant addition to safety on the Thames and mean that the Brigade can tackle incidents of all kinds with dedicated teams on the water and on land, providing vital information to the fire service’s control room and emergency service partners to coordinate rescues.

“Since the Grenfell Tower tragedy, our fire service has transformed the way it responds to incidents – especially fires in high-rise buildings across the capital – and it’s so important that we ensure that this progress continues at pace so that we deliver the very best fire service for London.”